Tanner is 4.  I can’t believe I have such a big boy.  Time is flying by way too quickly.  And for his birthday he wanted everything LEGO.  He especially is obsessed with the little LEGO figurines.  He can’t get his hands on enough of those.  So...of course I had to go ALL out.  After all, he is my oldest and we are now in our brand new house which is like a blank canvas.  And boy did I go all out for this one.  Yes, I have an addiction to party planning.  I can’t help myself. 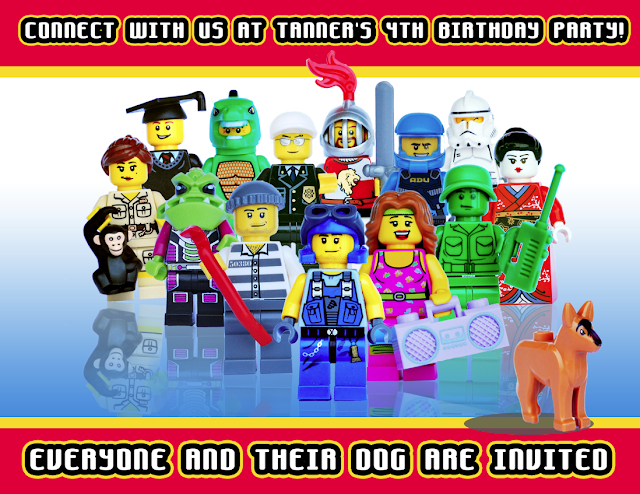 Above:  Front of the invitation.  I spent hours taking photos of each lego guy and then editing them in photoshop.  But hey, all for the sake of a good party, right?

Below: the inside page of the invitation. 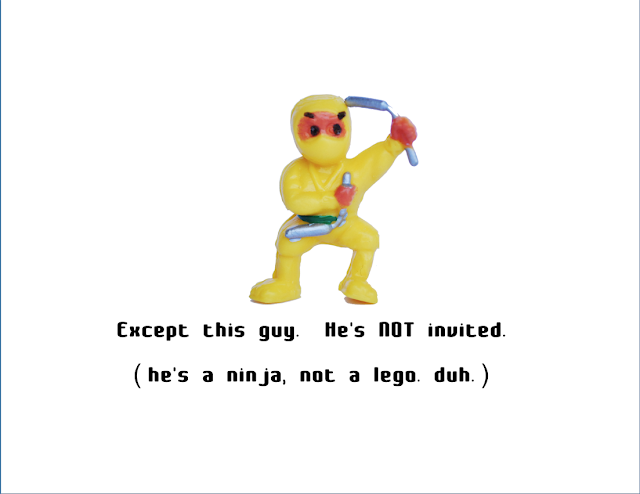 Below: the last page of the invite.  Had to blurr out the info...cuz ya never know what crazies are out there. 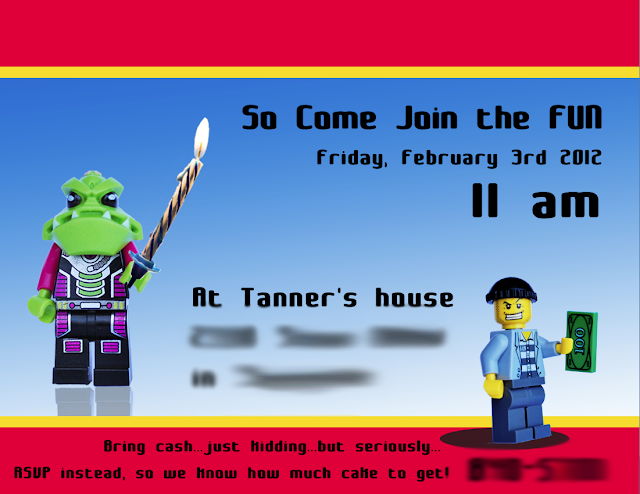 Michelle gave me this idea...one day she said, “there’s got to be a way to decorate your giant fireplace like it’s a bunch of stacked up LEGO blocks.”  This is what I came up with.  Thanks to dollar store plastic table cloths and painter’s tape.  Also, his name is formed out of giant MEGA blocks. 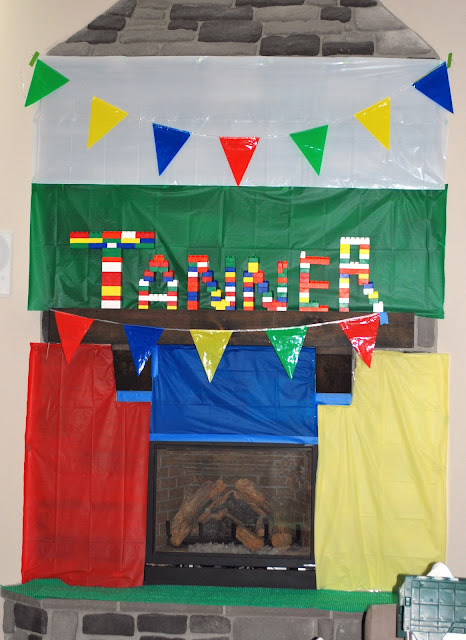 Of course, the entryway had to be LEGO themed as well.  My mom (through her printing business: “More than vinyl”) printed up the LEGO figurines from the invitation and then my husband stuck them on painted cardboard and cut out their faces so that the kids could take pictures AS LEGO people.  There were at least 6 of these scattered throughout the house. 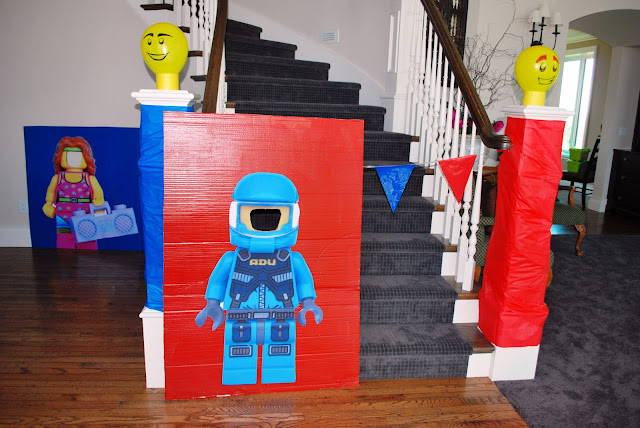 Here’s another LEGO guy.  Then if you notice, all my benches and window sills are wrapped in green bubble wrap to give the illusion of green LEGO bases. 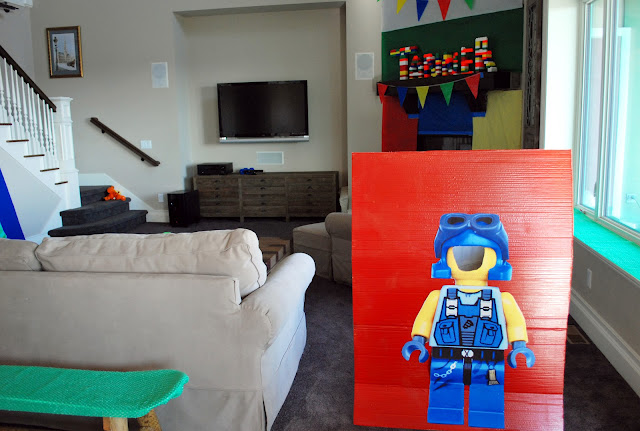 Here’s Ben posing as the above LEGO guy! 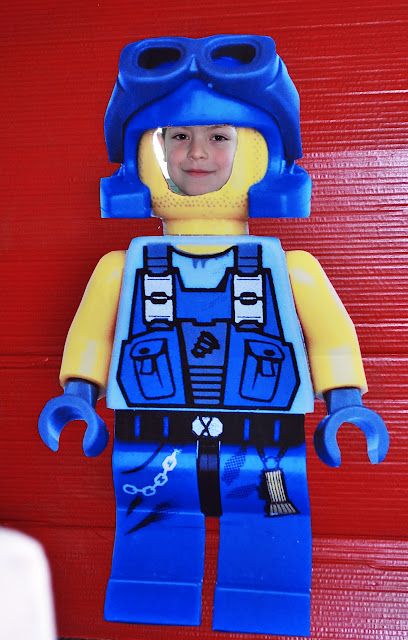 Speaking of that particular LEGO guy.  For some reason he’s Tanner’s very favorite guy.  So my mom screen printed him on a T-shirt for Tanner so he could be that LEGO guy all day long.  I though this was a cute idea.  Check out her website if you want to see more creative ideas for other parties that we’ve done. 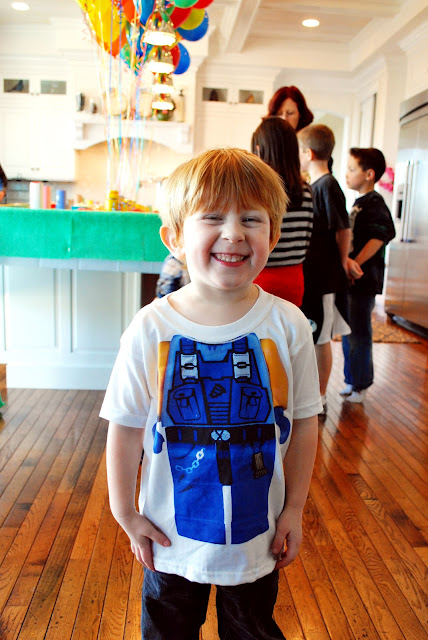 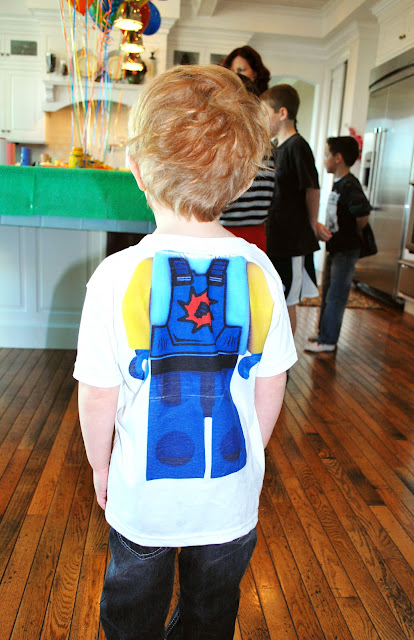 y mom can also print removable wall vinyl with any photograph sent to her.  I sent her a few of these LEGO guys photgraphs and she sent them back in giant sticker form.  And I put them up on the walls throughout the house.  Sooooo life-like, don’t you think? And they peel right off without leaving a trace of residue. Here’s her website again:  www.morethanvinyl.com 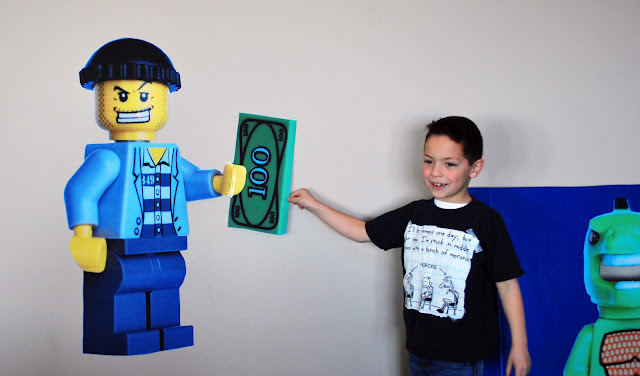 As the party goers arrived.  They were encouraged to “Guess how many LEGO blocks” there were in the clear jar.  I put 104 Duplo blocks in there.  But the common guess was 60.  Guess those Duplo blocks are deceiving. 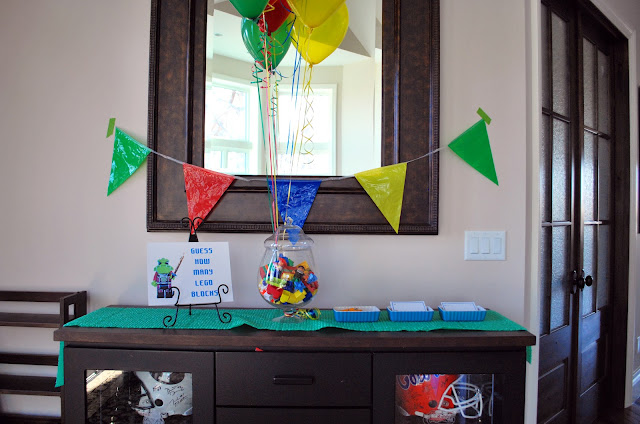 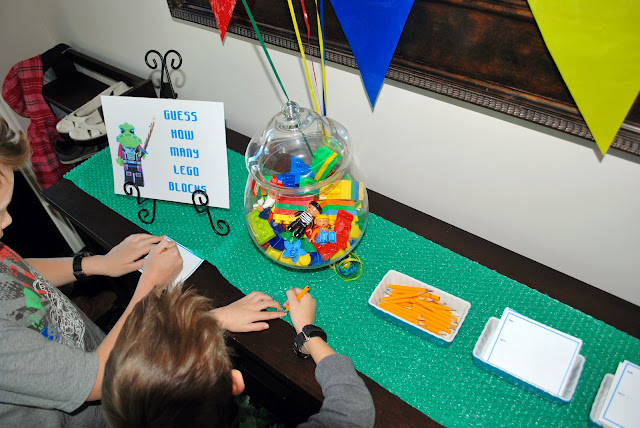 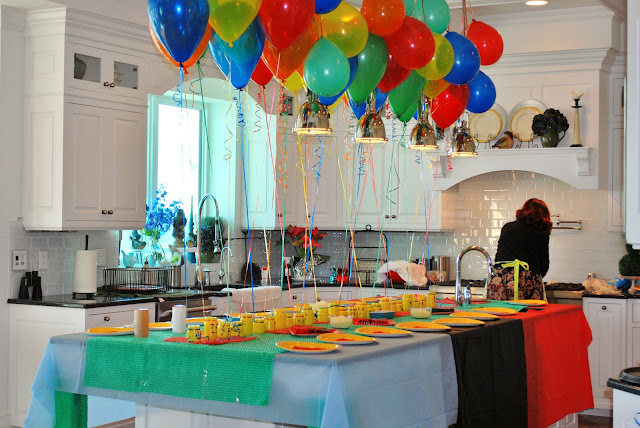 Then the kids made their way to the kitchen where they made their own pizzas.  My intent was that the pizza dough would be formed into rectangles and they would put tiny round pepperonis or olives or ham on them.  So that it looked like a pizza LEGO block.  But yeah....this is how they all turned out.  But it was yummy nonetheless.  Thanks to Nana Katie’s famous homemade pizza recipe.  Tasty Tasty! 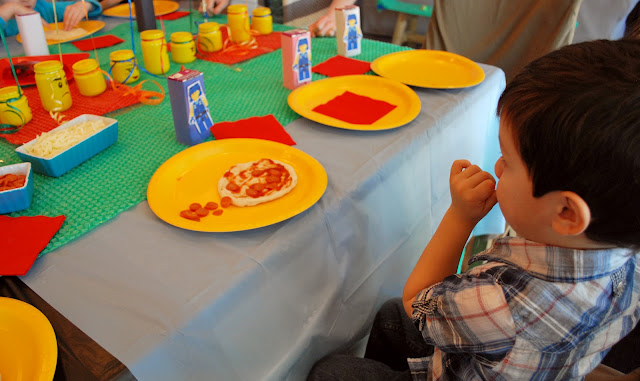 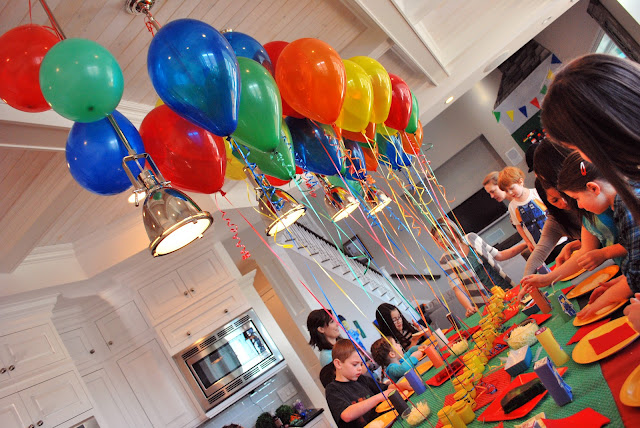 While the pizza’s were cooking, we made our way to the LEGO play room.  We played a few games like:  See who can build the tallest LEGO tower in 1 minute, or the coolest mansion in 5 minutes.  It was fun to see the kids work together as groups.  They were so competitive. 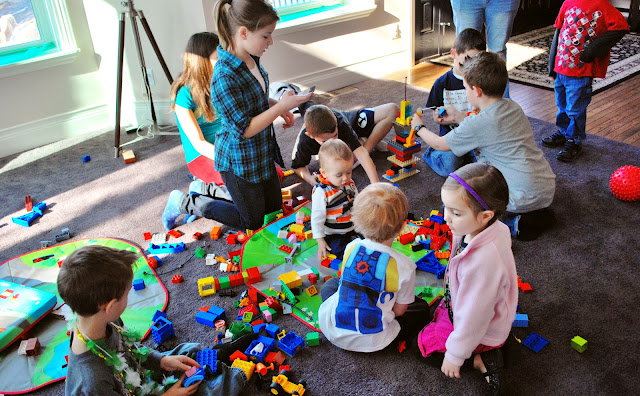 After we ate.  It was cake time!  So we made our way to the dining room.  Yes, that is a Duplo LEGO train circling the cake. 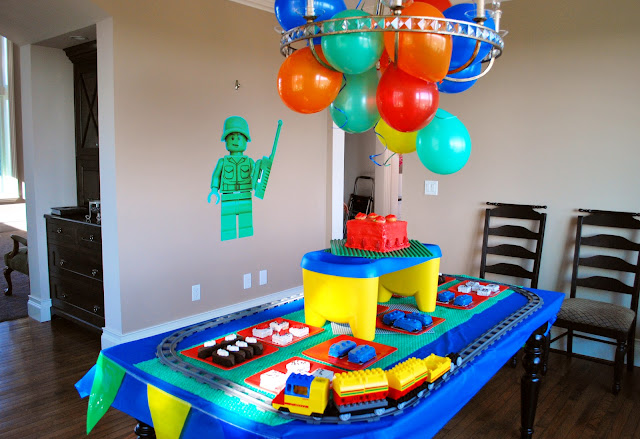 Don’t look too closely at the cake.  It’s not one of my finest jobs.  I frosted it that morning in a hurry, so it didn’t turn out how I had it envisioned in my mind.  Oh well...next time use fondant. 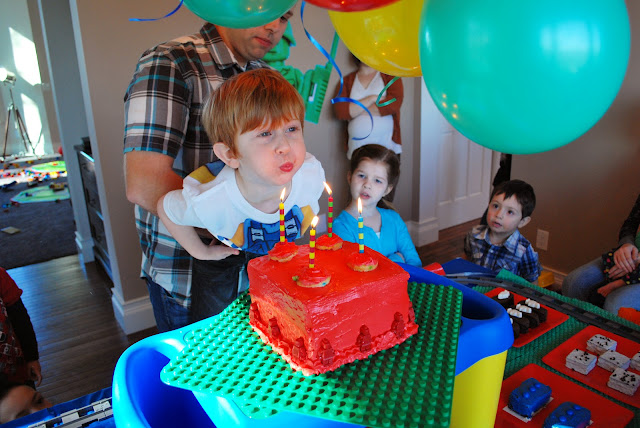 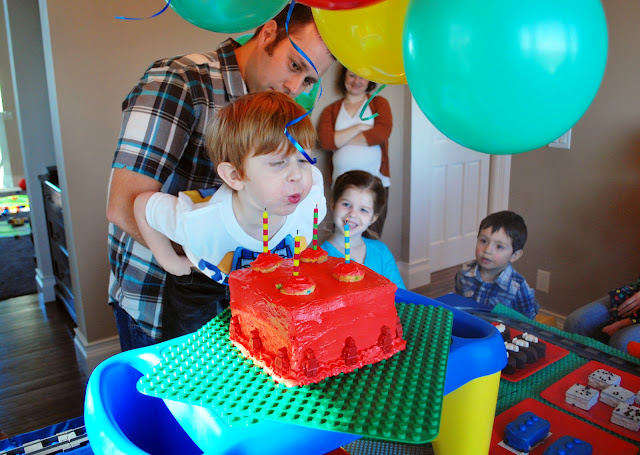 MIchelle made the chocolate LEGO figurines out of some moulds I bought online.  I also had some regular LEGO block moulds as well.  But we didn’t get around to doing anything with those.  And yes, those are Little Debbie snacks and frosted Suzi Q cakes.  I try to cut corners where I can...I’m not the best baker in the world, that’s for sure. 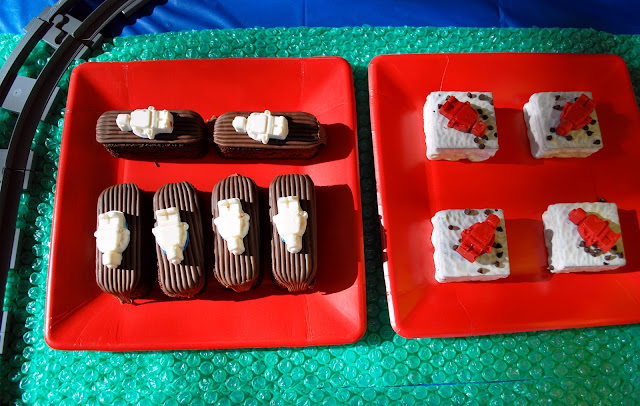 Next, Tanner got to open his presents wearing his LEGO crown that his pre school teacher made for him.  What a stud. 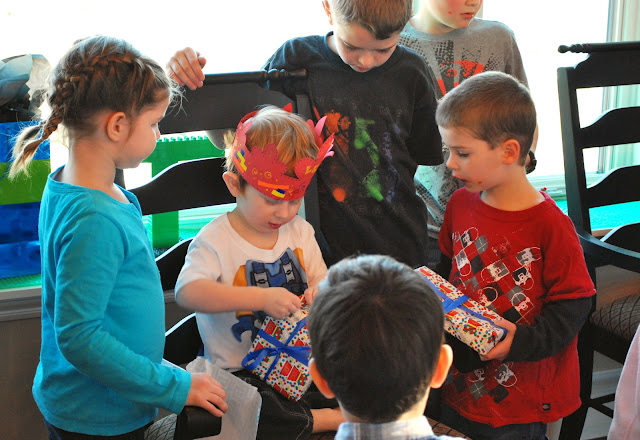 And lastly, each child got to take home a LEGO head (painted baby food jar) filled with LEGO candy and their very own mystery LEGO figurine.  Here’s Luke modeling his party favor for us.  I got the idea off of Pinterest. Here's the link to the pin 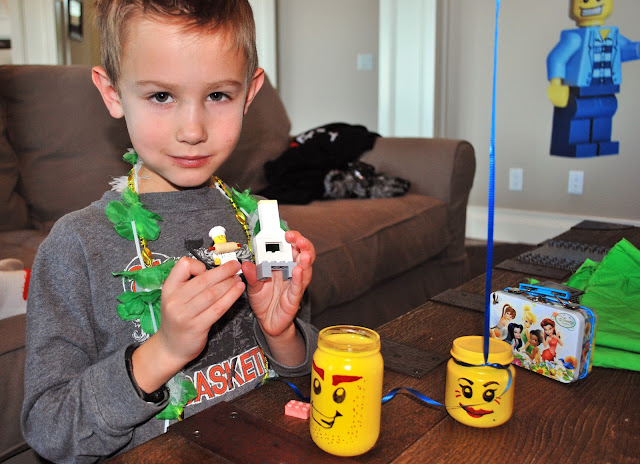 Tanner had a fun day.  And it was kind of cool to have our house look like LEGO land for a weekend.  And yes, I kept the decor up all weekend long.  No reason to clean up too quickly after spending a week decorating, right?...and also, I was pretty exhausted too.  But in a good way and so very happy to see my little boy so excited and so grown up at his party.  Ahhhh...they grow up too fast.