It was Lilly's 2nd birthday.  And because she's pretty special, we had to throw a pretty special party for her.  I based the theme off of Alice in Wonderland (the newest movie version).  So it was a whimsical, shabby chic, little tea party. 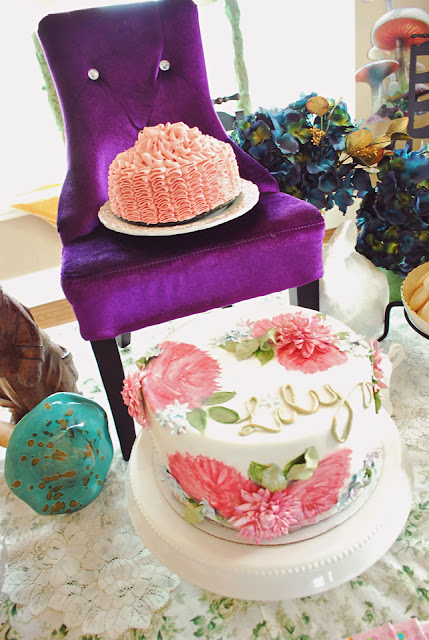 Of course, like the year before, we had Joreen from Bon Vinos make her two cakes.  Yes, she got two of 'em.  One just for her (gluten-free, dairy free, and egg free), and the bigger one for everyone else.  Seriously too cute for words...so cute, in fact, we will over look the fact that her name is spelled wrong.  Ah well.  Nobody even noticed.  I got the ideas for these cakes from Pinterest, of course.  Here are the links:  ruffle cake and painted flower cake 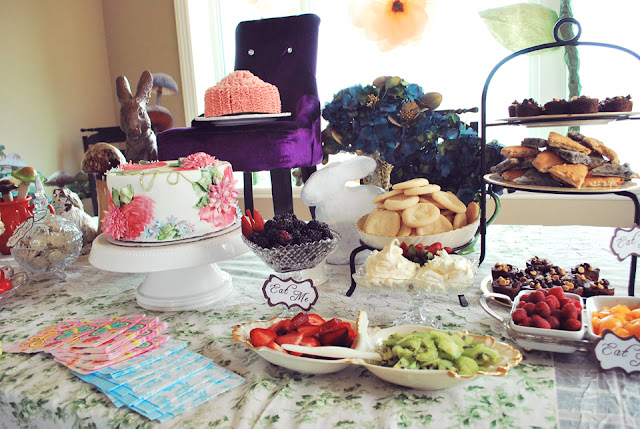 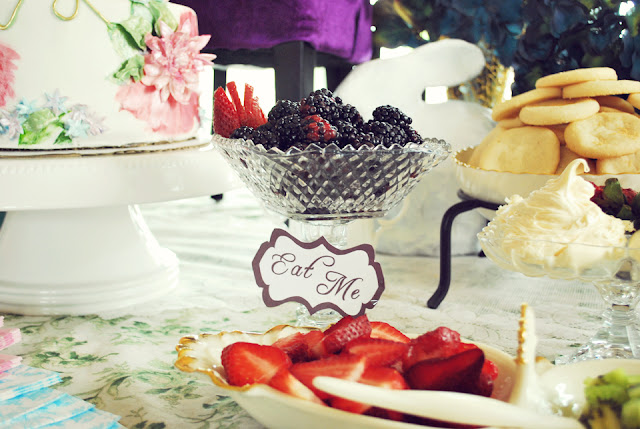 Here's another shot of the spread.  Lots of goodies for everyone to eat--even "make your own mini fruit pizzas" (Thank you, again, Pinterest) 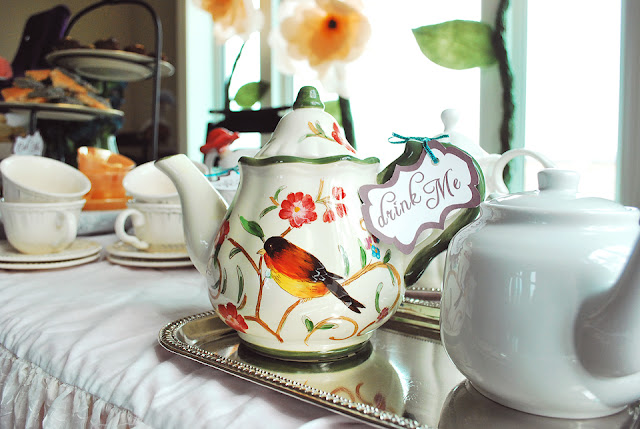 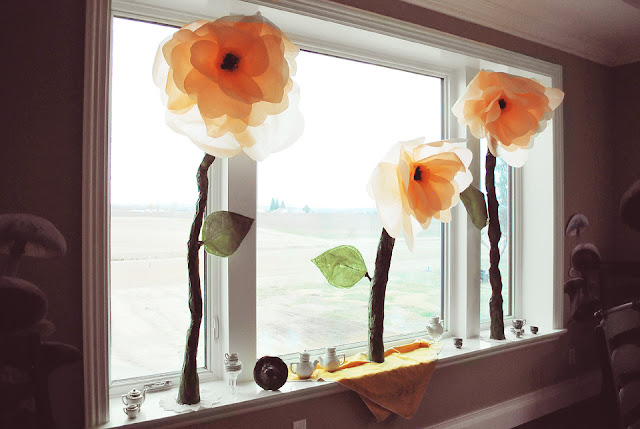 These three beauties were tough to make.  It was almost a pinterest bomb...but thankfully, my husband saved the day and helped me out with his wire bending skills.  I'm really glad we had these though, cuz they sure did make a statement.  Here's the link to the pin if you want to see the inspiration: Giant Paper flowers . 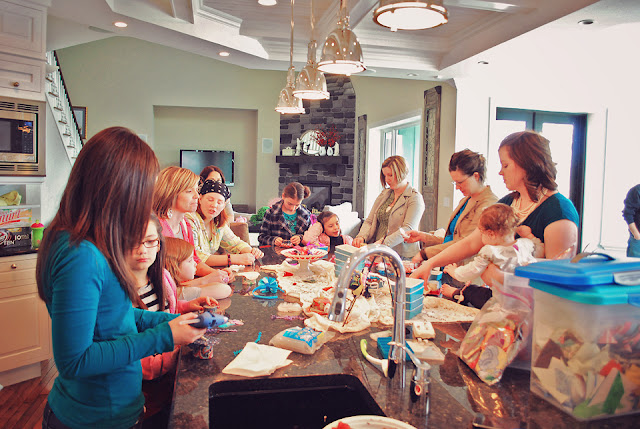 Party-goers got to make their own clip on mad hatter hats.  We got some pretty interesting designs. 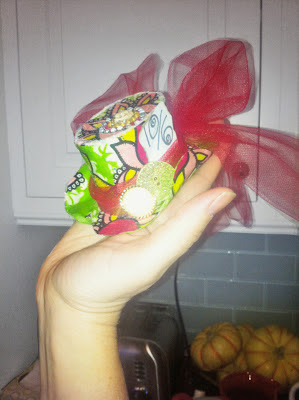 Here's the very first hat I tried.  Turned out pretty dang cute, if I must say so myself.  Here's how I got the idea: mad hatter hat cake topper and this link too: Divine hat designs .  Michelle and I had a ball making these.  We made these about a week before the party so they could be dry enough to put jewels and ribbon on.  This was where the party goers got creative.  They just chose a hat, then embellished the crap out of it.  And here's how I created them: 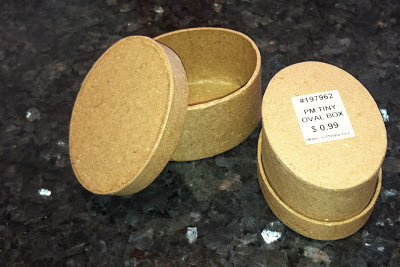 2. Then I cut out circles just slightly larger than the oval box using your basic cardstock paper. 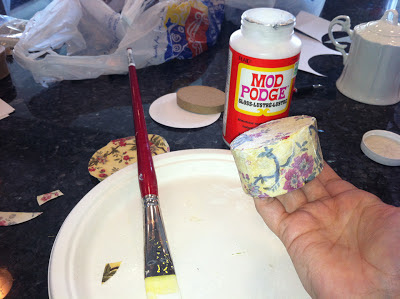 3. Mod podged some cute material all over the box part.  I did about 3 coats or so...so it would be nice and hard. 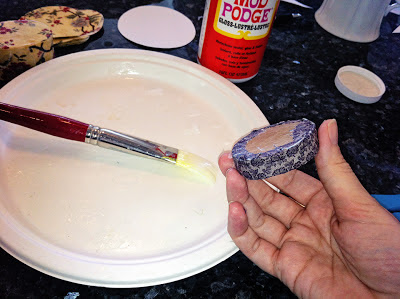 4. I wanted the "band" part of the hat a different color.  So I mod podged this with a different, complimentary color of fabric. 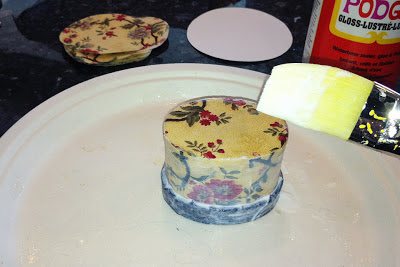 5. Then I just glued and mod podged the box and lid together.  Except I turned the lid over so it didn't fit together like a box should.  This added a little bit of extra height to the hat.  I wanted this to be as tall as I could get it.  Every centimeter counts!!!! 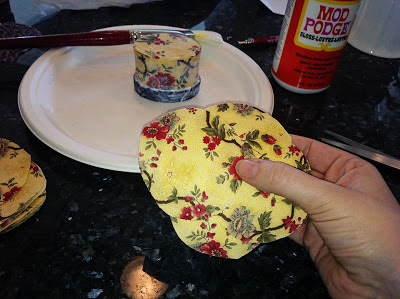 6. Remember that circle I cut out from cardstock?  Well, I took that circle and then added four circle pieces of material and grouped them together like this.  You can't see the cardstock circle, cuz it's hidden behind the four material circles.  Kapeesh? 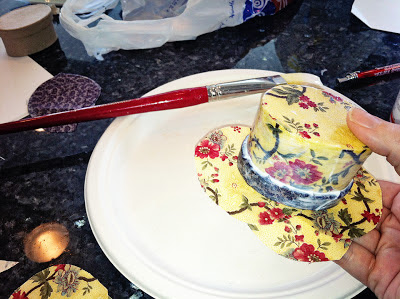 7. After those 4 material circles were firmly attached to the cardstock circle, I simply attached it to the hat. 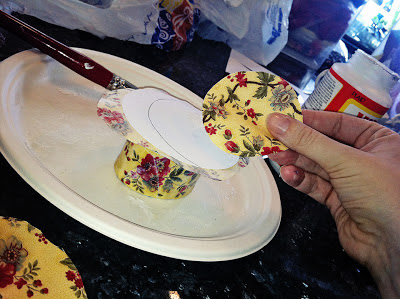 8. Once it dried a little, I turned the hat upside down and mod podged more material circles to the underside. 9. Almost done...I just shaped the sides of the hat so they looked turned up and kind of curly.  I just played around with this and let it finish drying upside down for a day or so. 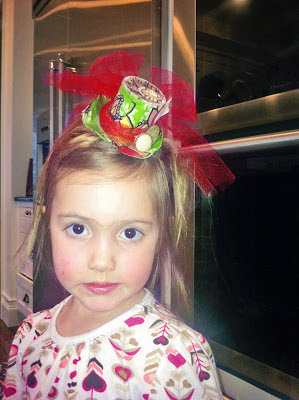 And here's Janie wearing the first, test hat.  I just threw on some tulle, and glued some buttons on, and a 10/6 sign and called it good.  I just used one of those alligator clips and hot glued it to the bottom of the hat.  These hats are a little heavy, but they stay on okay if you're wearing a ponytail.  And you can make one of these for about $1.50.  Not bad, eh? 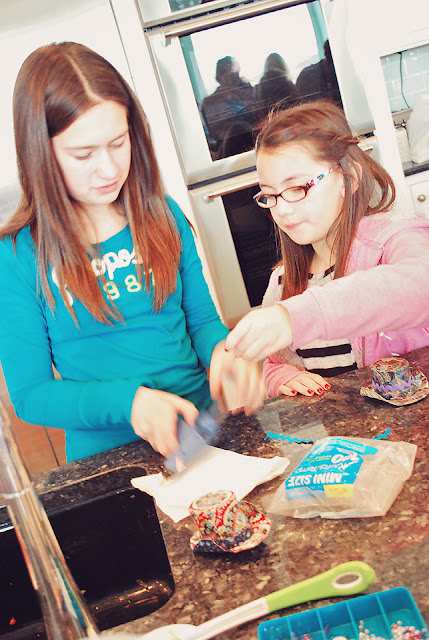 Here's Aline and Lia in the ultra creative process with their mad hatter hats.  I think they're messing with the glue gun. 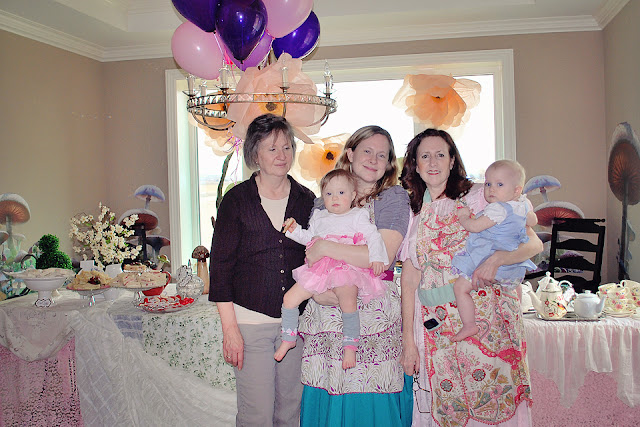 Yep.  Here we are after the party died down a bit. I never do my hair or make-up on a party day, cuz I am always running around frantic getting last minute stuff done.  So I don't even know why I let someone take a picture of me.  But My mom came all the way out from Utah bringing all the mushroom wall decals you see in the back.  It was fun to have her there.  Except....what are you looking at, mom?  I think she was as pooped as I was at that point.  We were up really late the night before putting all the decals on the walls.  Yeah, fun stuff.  All this for a two hour event. 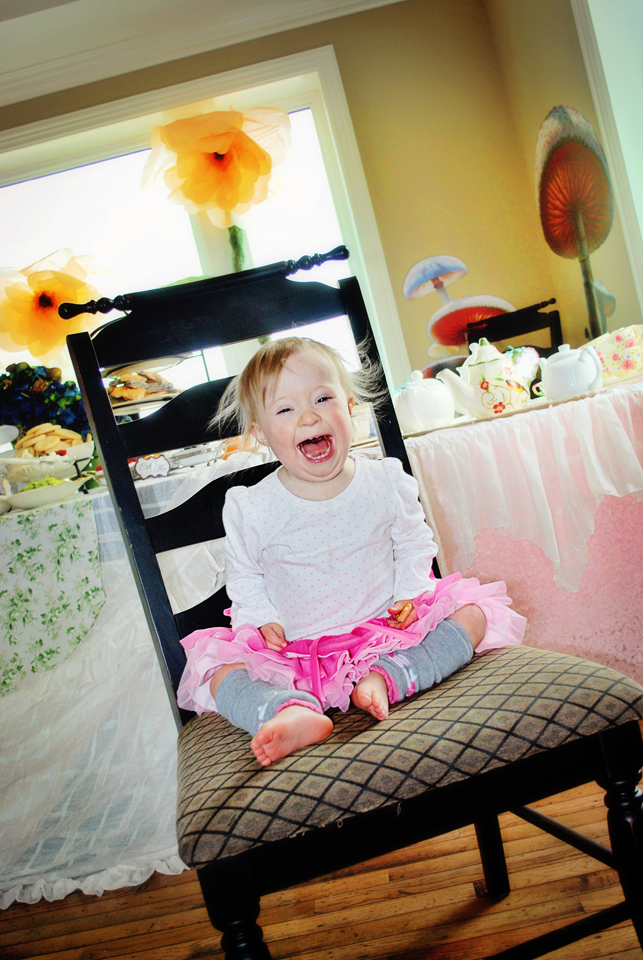 BUT.... the most important thing was that this girl was happy.  And she was.  She loved having all the attention and everyone celebrating here special day.  Then she konked out right before it was time to open presents.  Oh well....
Posted by Erin at 1:07 PM