Yet another LEGO party that I had to plan. ((yey))  I'll tell ya what, I'm kinda burnt out with the whole party thing.  It's like...why do I keep doing this?!?!  I don't know.  I think my friend Michelle thinks I keep doing it to torture her, because she's the one who picks up the slack and then has to deal with a  crazy lady when I get all stressed out.  But whatevs...I only have three kids.  So I might as well make them feel special.  The good news is: I had most of the decor saved from last year.  I just added about 19 million new ninja wall decals all over the house, special ordered from my mom's vinyl business: More Than Vinyl . 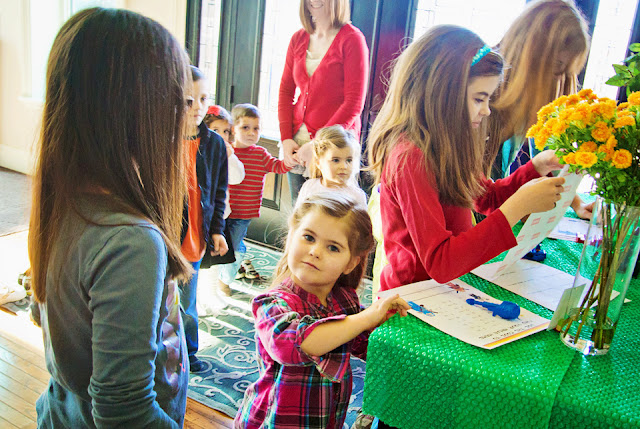 So here's how it went:  Kids arrived and got their "Ninja Name".  Just a little decoder sheet of paper that helped them find their ninja name.  I got the idea here: catch my party Ninjago . 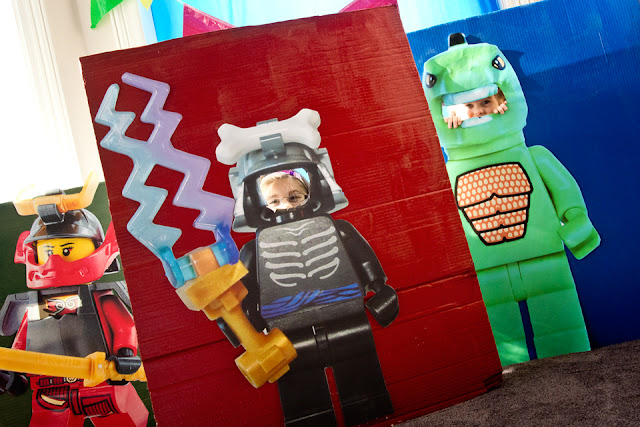 Then the little ninjas were led to the living room where a photo booth was set up.  The kids had a great time with that as you can tell from all the pictures below. 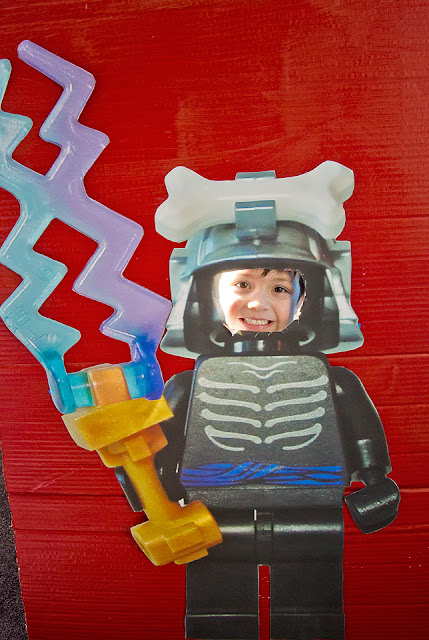 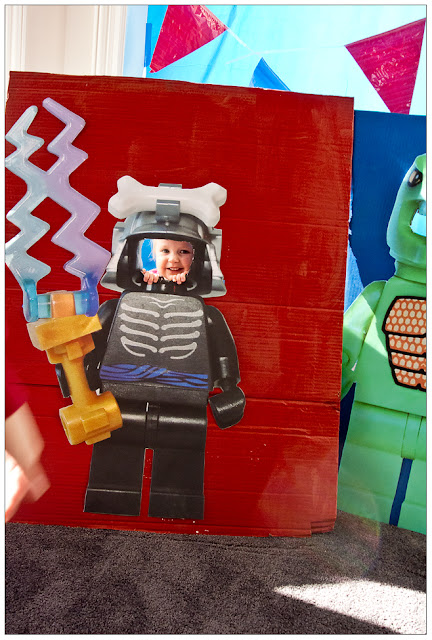 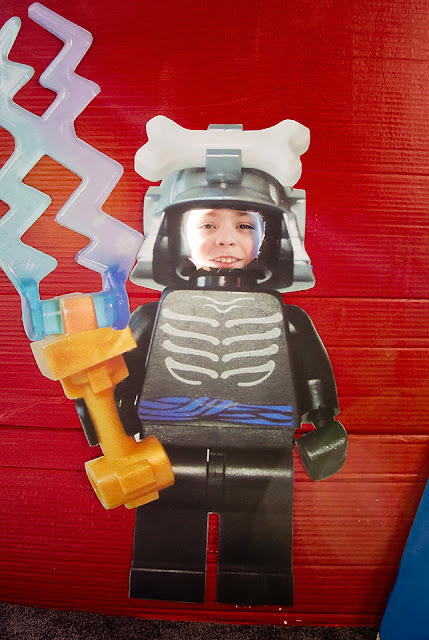 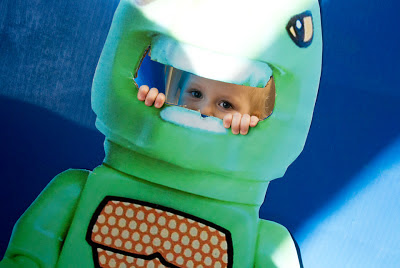 Except for the "Daisy-a-sauras".  That one is pretty adorable. 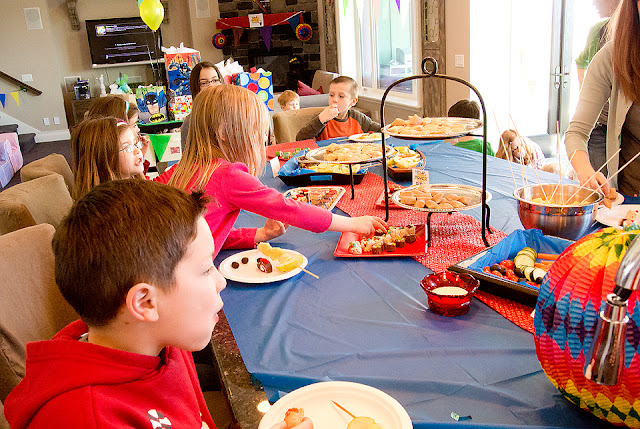 Then our hungry little ninjas and ninjettes ate.  Mmmmmmmm, what a feast.  Here's what we had: 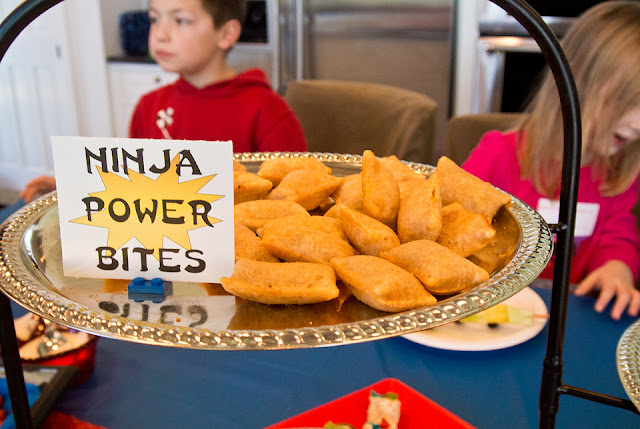 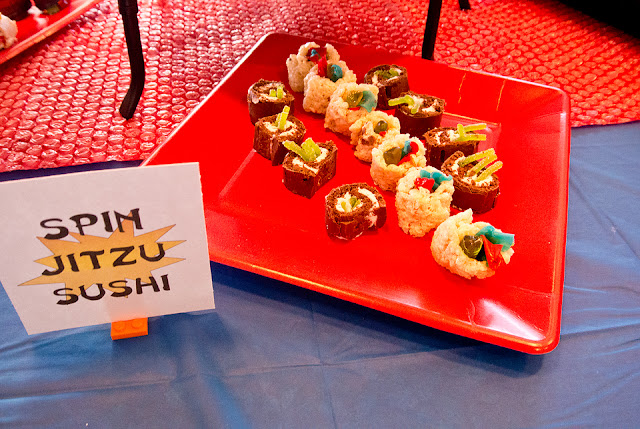 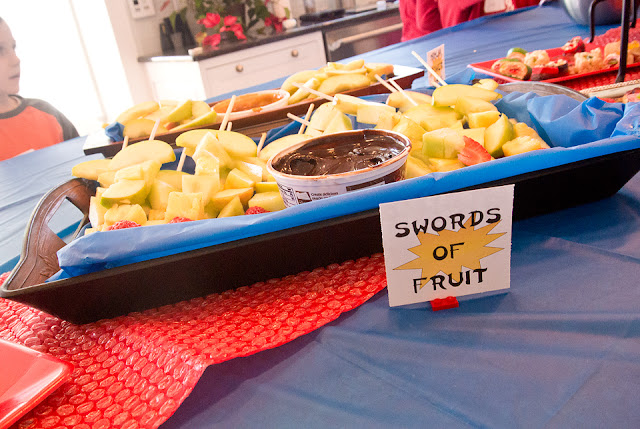 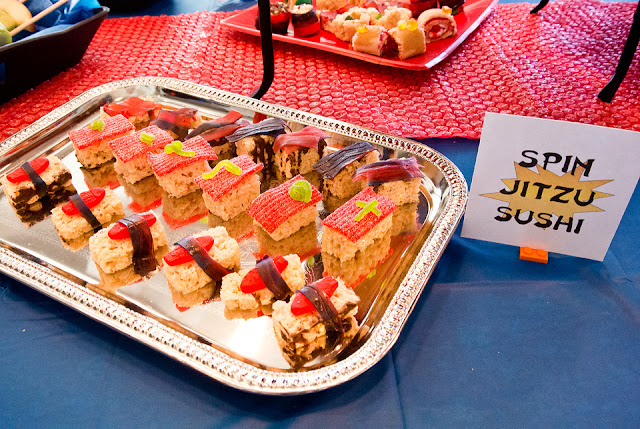 Got the idea of food from several blogs out there.  Here's a shout out to all those blogs: "Thank you!" I don't think I could actually plan a single party if it weren't for google and pinterest.  And thank you to, Michelle, who made all the food.  I thought she did awesome on the sushi!  It looks so real!  You rock, Michelle! 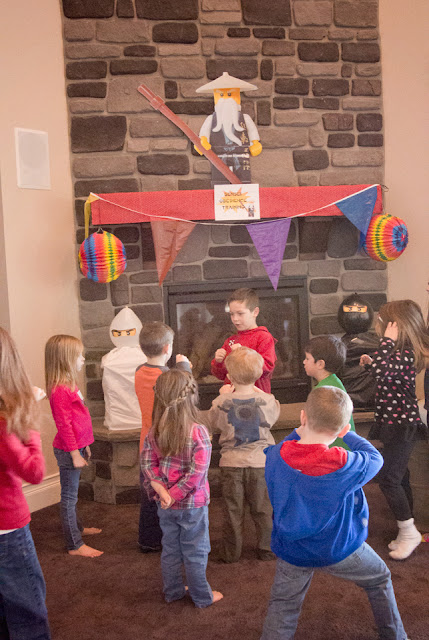 So after our bellies were full, we went straight for the ninja training.  Our original "Sensei" was busy being a chiropractor, so his son, Ben-sei Wu, led the kids in the first part of our Spinjitzu training.  Look at Luke in the back there...totally getting into it.  I love that!  He's like "Hi-ya!" And everyone else is just standing around.  Ben was a good Sensei. Very patient and very knowledgable.  Good Job, Ben-sei! 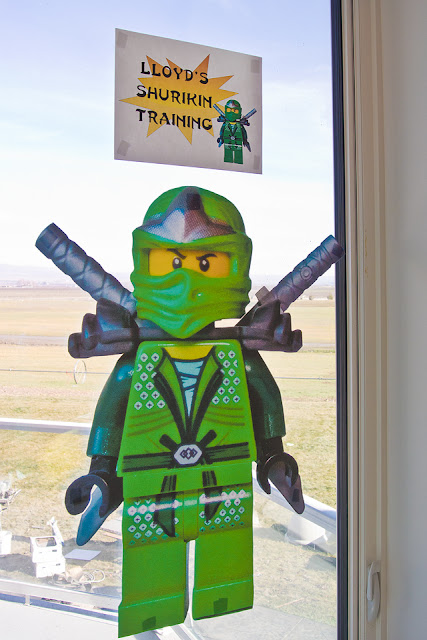 Next was Lloyd's Shurikin Training.  I think shurikins are like chinese stars...maybe?  Well, let's just say that's what they were for our party--except our version of chinese stars were suction cup balls.  I got a 12 pack of  these suction cup balls and then had my mom print some bad snake guys on butcher paper.  Then I attached the bad guys to the other side of the glass doors.  The object of the game was to throw the "shurikins" at the bad guys and see how close they get to "killing" them.  The kids actually liked this game the best.  No. they loved it.  We now use the same suction cup balls to help Tanner with his reading skills.  We'll put up letters of the alphabet on the windows with painter's tape and ask him to throw one of the balls at whatever letter a particular word starts with.  He would play that game all night long if he could.  There's just something about throwing things that kids like.  You can't go wrong with these suction cup balls. 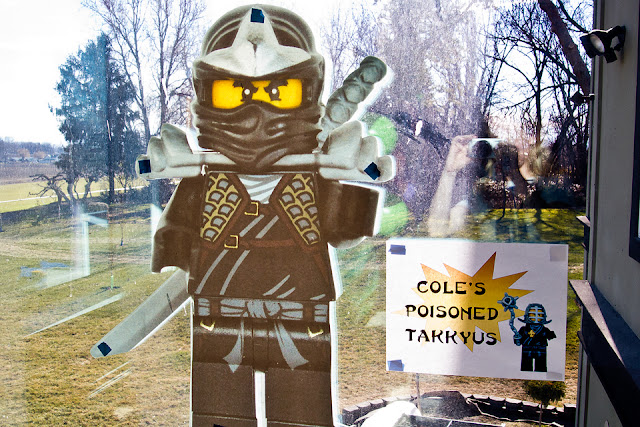 After that excitement and everyone had like a billion turns. We moved on to: Cole's poisoned Takkyus. Again, I'm kind of shootin' in the dark here, cuz I have no idea what takkyus are.  So, we just pretended they were like a dart or something.  I blew up a bunch of balloons and drew evil snake eyes on them.  Then attached them to a cardboard back drop.  This made my husband a little nervous to have a bunch of small kids throwing darts in our new house.  So he was in charge of this game, watching the kids like a hawk. 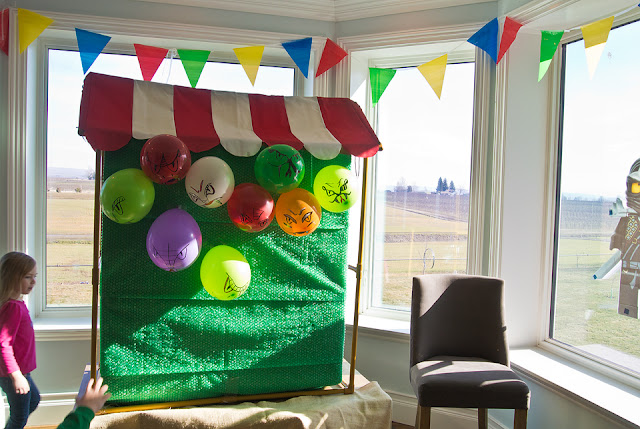 This was actually hard for the kids.  Except Tanner.  Dang that kid could pop a balloon each shot he took.  Couldn't believe it.  Hmmmm, I might actually have a future athlete on my hands.  Don't hold your breath though. 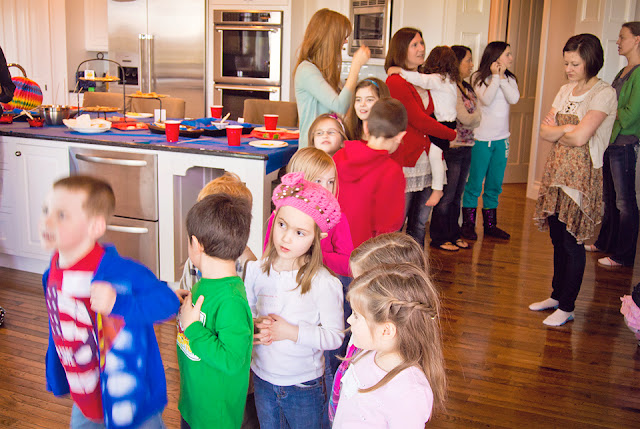 Here's the enthusiastic line-up of the kids waiting their turns.  Luke as always, is over-enthusiastic.  Funny.  He cracks me up.  He's like "Yesssssssssssss! Take that!!!!!" As the little Kannaly twins look on in wonder. 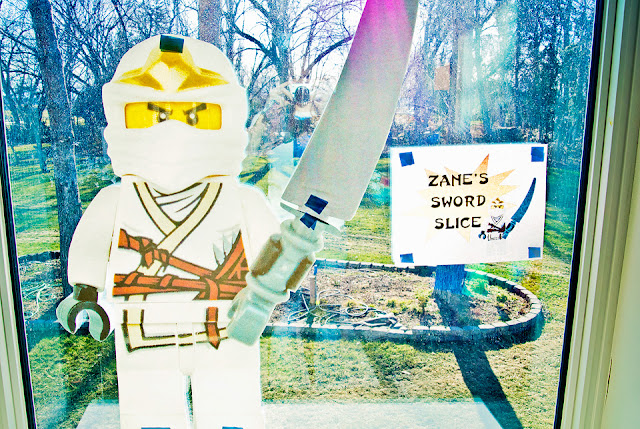 After that awesomeness, we went back to the living room for some pinata fun.  This part of the training was called "Zane's Sword Slice".  So the kids used a "sword" (a.k.a baseball bat) to destroy the evil snake guy.  And here's what the evil snake guy looked like: 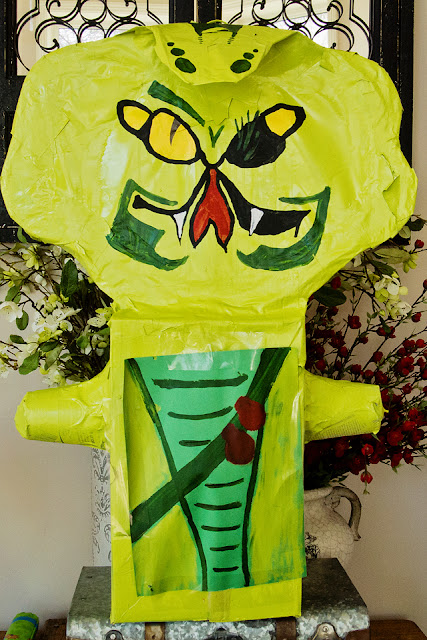 Pretty amaze-balls, eh?  Of course, Michelle came through once again.  She created this amazing replica of this guy in her spare time: 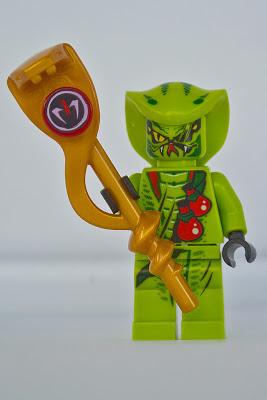 The kids loved it too. As you can tell by the scene below: 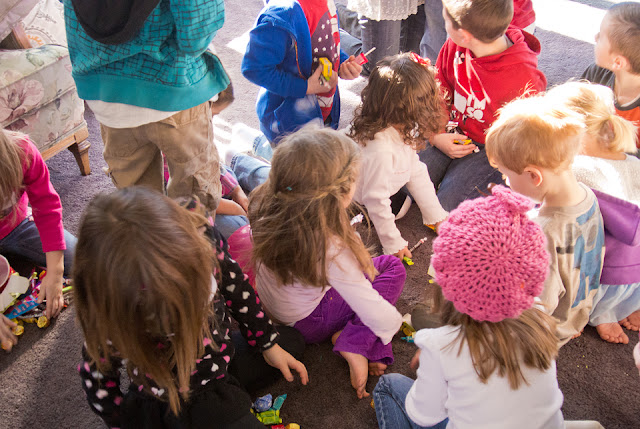 Almost there...we had one final test before the cake ceremony.  Kai's final test: 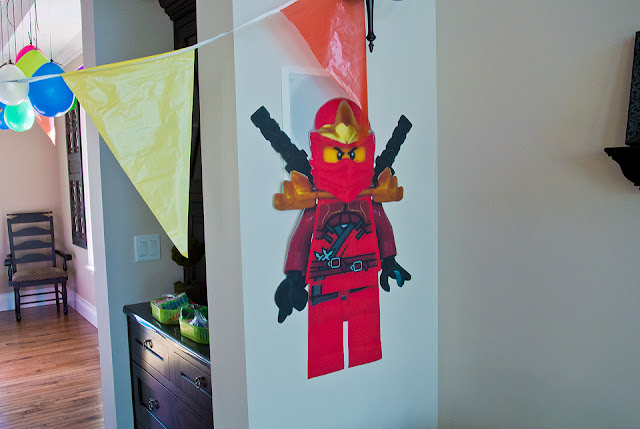 The kids had to show me their best "Ninja Move" before they got to pass through into the cake room.  Where Jay, the blue ninja, was (Tanner's favorite ninja).  The kids mostly did the same thing, and that was whatever the kid in front of them did.  So I got a lot of jumpy karate turns--which usually just ended up face down on the floor.  Oh well, so much for spinjitzu training.  We handed out sticky ninjas and inflatable swords as their parting gifts.  Yippee. 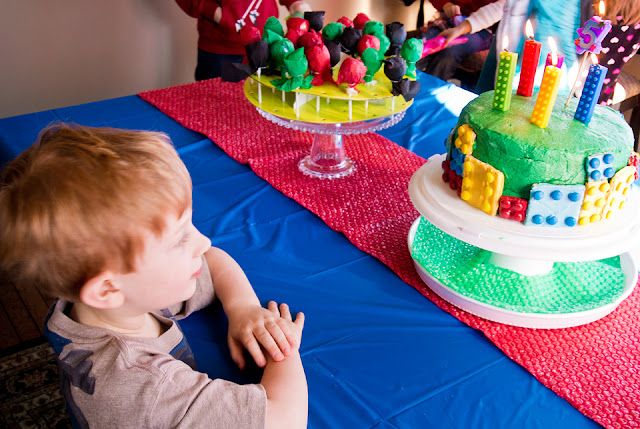 Thanks to Joanna for making this cake for me.  I'm a tired mommy and don't have the time to do everything.  She did a great job though.  I had the intentions of  molding a blue ninja guy out of modeling chocolate.  But that didn't happen.  So we found LEGO candles instead.  Good enough. 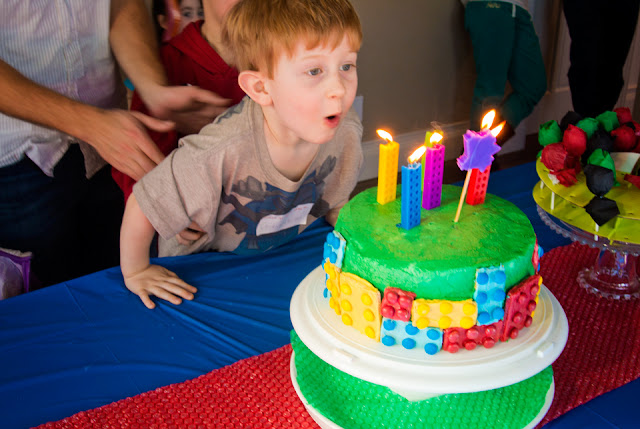 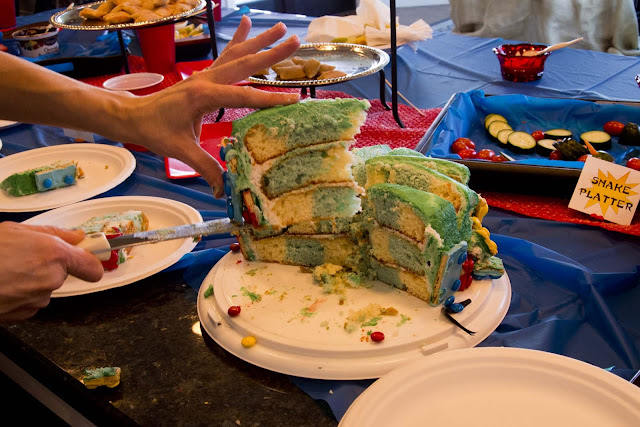 Here's the inside of the cake.  She did a little checkerboard pattern.  Good job, Joanna.  That's Michelle dishing it out.  Nice form.  The cake was gone in 30 seconds.  It was yums. 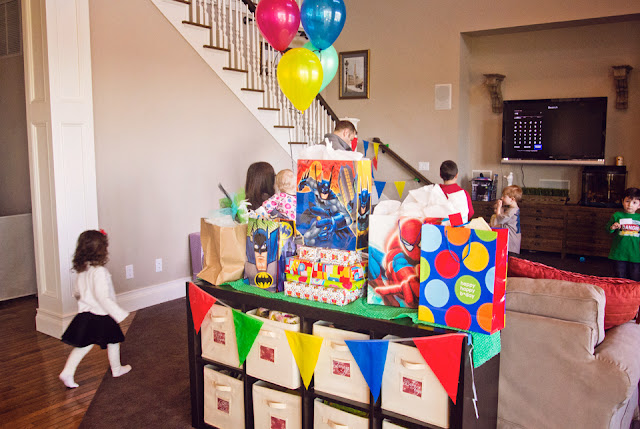 Is it over yet? Nope.  We opened presents next, blah blah blah...and that was it.  Let the kids watch a ninja episode and then they left.  Over in 2 1/2 hours.  Piece of cake.  The end.